Ski Style: My first date (disaster) with the slopes 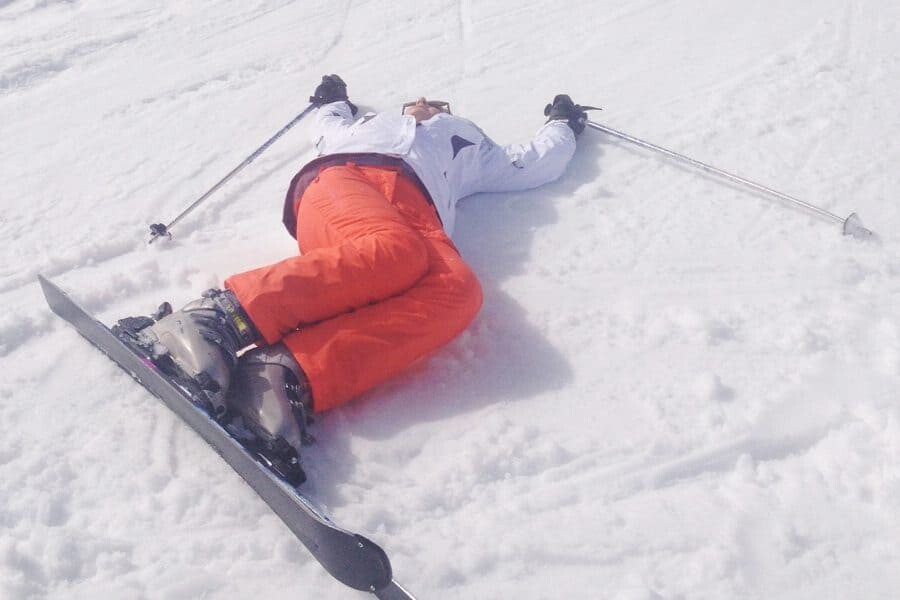 Please tell me I’m not the only adult first time skier to cause chaos at the ski slopes?

As groups of four year old children zipped past me at what felt like the speed of Olympic downhill skiers, I stood awkwardly trying not to slip over whilst standing still.

Waiting for the ski lift at Les Orres in the French Alps with my partner and his father, both French and both experienced skiers, I was nervous about the slopes ahead and took a silent bet on whether I would break my leg or arm first. I had visited the snow before but only graduated in making snow balls, snow angels, drinking hot chocolates and taking photographs of snow, never skiing or snowboarding that’s always been a crazy thought for my clumsy nature. 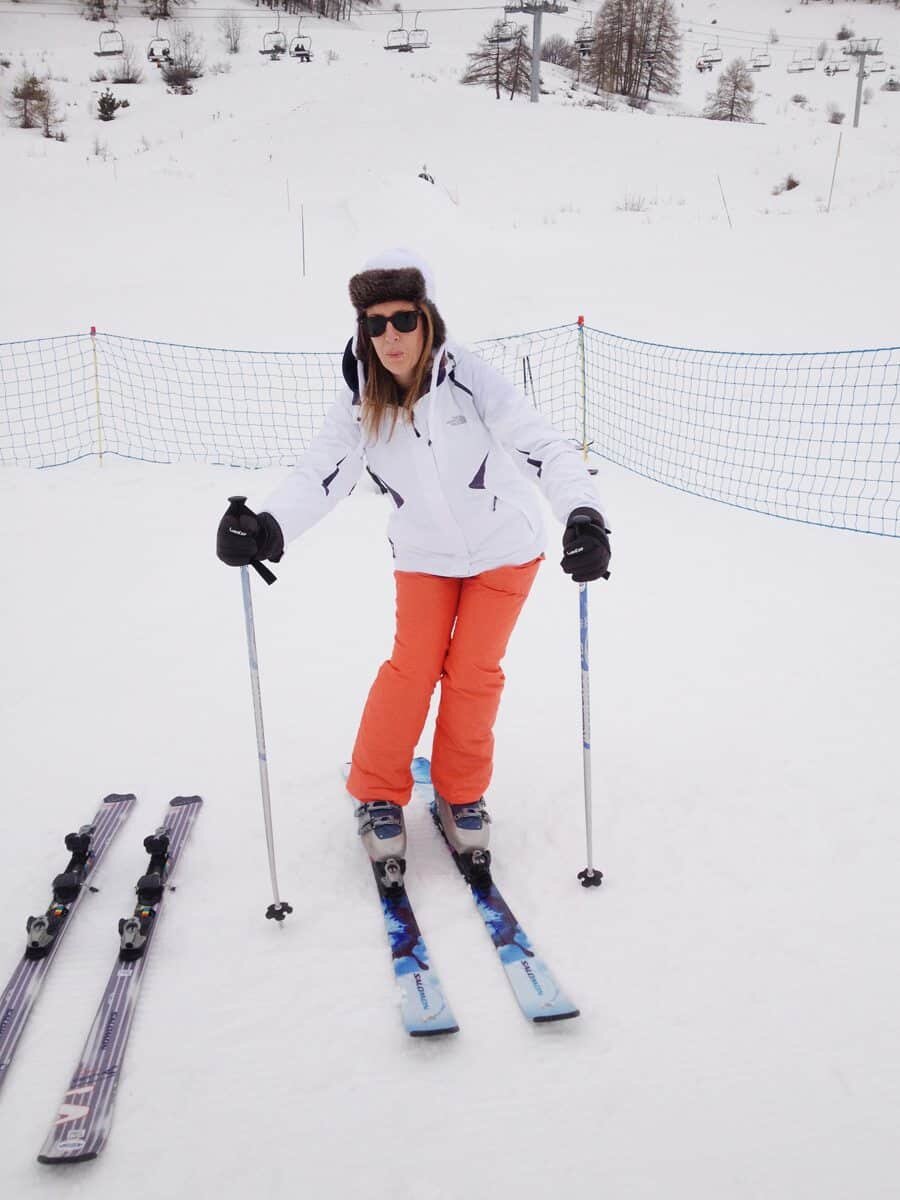 My pre-ski confidence in the car park wearing my fancy new ski pants (which I still love regardless of my ability).

The ski lift itself seemed like no big deal, you sit on it and then slide off it…easy. Apparently though I didn’t get the winter sport gene the Europeans seem to be born with. As I sat onto the chair with a thud and only half my bottom in the correct position I learnt that my ability to walk, sit or move is limited to hard flat surfaces in a summer climate.

The snow and I weren’t going to be good friends.

Before we reached the top of the lift my partner Clement prepared me for the sliding off part, he told me to ensure my feet were together facing forward and to simply stand up with a little push. I followed his advice but somehow forgot my right ski was attached to my foot and with my ski sitting at a right angle when we reach the exit point I hooked Clement and sent him flying into the fence which in turn shut the ski lift to a sudden stop. Oops.

If that wasn’t bad enough, my exit wasn’t the most elegant either. Since my legs weren’t facing forward by the time I hit the ground, Clement’s father ended up grabbing my hand and pulling me off to ensure I wouldn’t get hit by the lift which meant I slid down the snowy mound on my bottom and finished flat on my back. Step one…fail.

After ten minutes gaining my composure back we set off for the first slope which went as expected with couples, families and professionals zooming past with ease as I created different techniques for falling over. In my head I kept repeating ‘I love skiing…I love skiing’ but the mantra didn’t seem to stick as I collected fresh bruises all the way down.

The mountain scenery was pure snow globey goodness and I attempted to soak in as much as I could each time I managed to spend more than two seconds standing up. Skiing is one of those sports that just looks so damn easy and when you’re the one who can’t work it out, it gets a little frustrating.

The snowy landscapes which provided a welcome distraction!

In hindsight it perhaps would have been better for me to start on the baby slopes as a giant amongst the three year olds but now that I was on the mountain with only one way down in front of me, I needed to suck it up and find some skills.

Two hours into the day I had managed to stumble my way down the first route…which typically takes about three minutes, progress! The patience of Clement didn’t go unnoticed, the poor guy spent his ‘fun ski time’ picking me up and standing on the edge of the slope to prevent me from toppling over it.

One of the greatest moments of the day was finding a pit stop. Nestled between the slopes was a log cabin with food, drinks and chairs to rest my bruised butt…it was a little frozen oasis. The boys went and hit the black (expert) routes while I sat in the sun and could finally gaze around at the wintry landscapes and take a few notes on ski style as I watched the crowds pass by. I sat here for close to an hour and while I was getting a little frosty, it was just the rest I needed to gain some confidence and start again on my way toward the ski village. 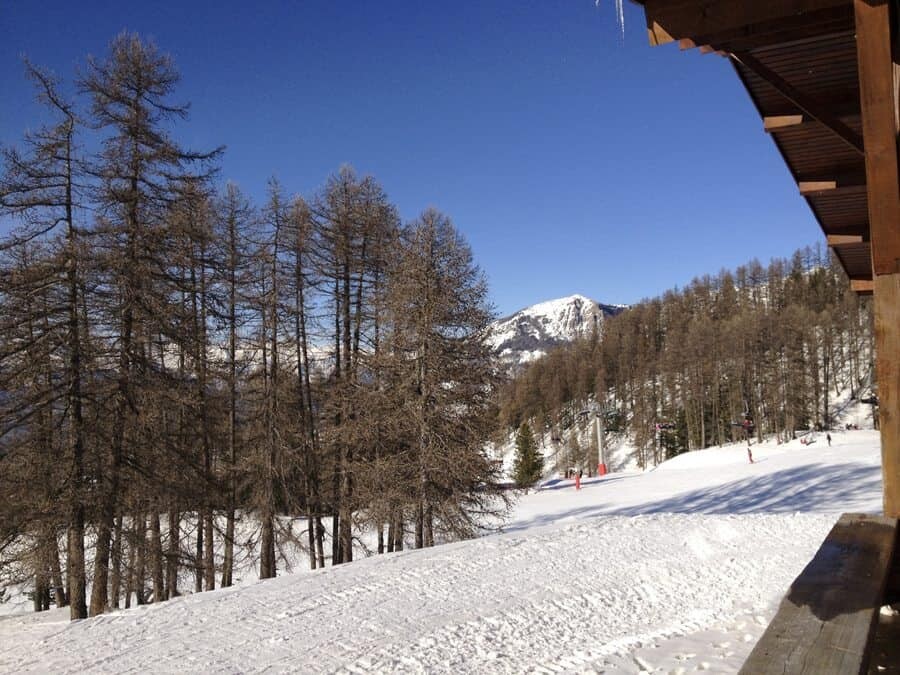 The view from my mountain retreat.

The boys (thank goodness!) came back to help me down the hill and we decided to catch a little lift to the top of a nearby slope which was supposed to be a bit smoother and easier for the beginners. It was one of the rotating lifts with the poles that hang down and you simply hang onto them and get pulled up the hill. Again, simple in theory however being the clumsy ski rookie I am, I for some stupid reason thought I had to put the pole between my legs and ride it up the hill…what happened next wasn’t pleasant. As I lay on the ground in agony the lift operator didn’t laugh or smile (good man!) he just offered his hand, pulled me up and noticing my discomfort and embarrassment he offered me another pole to try again. Second time worked a charm. 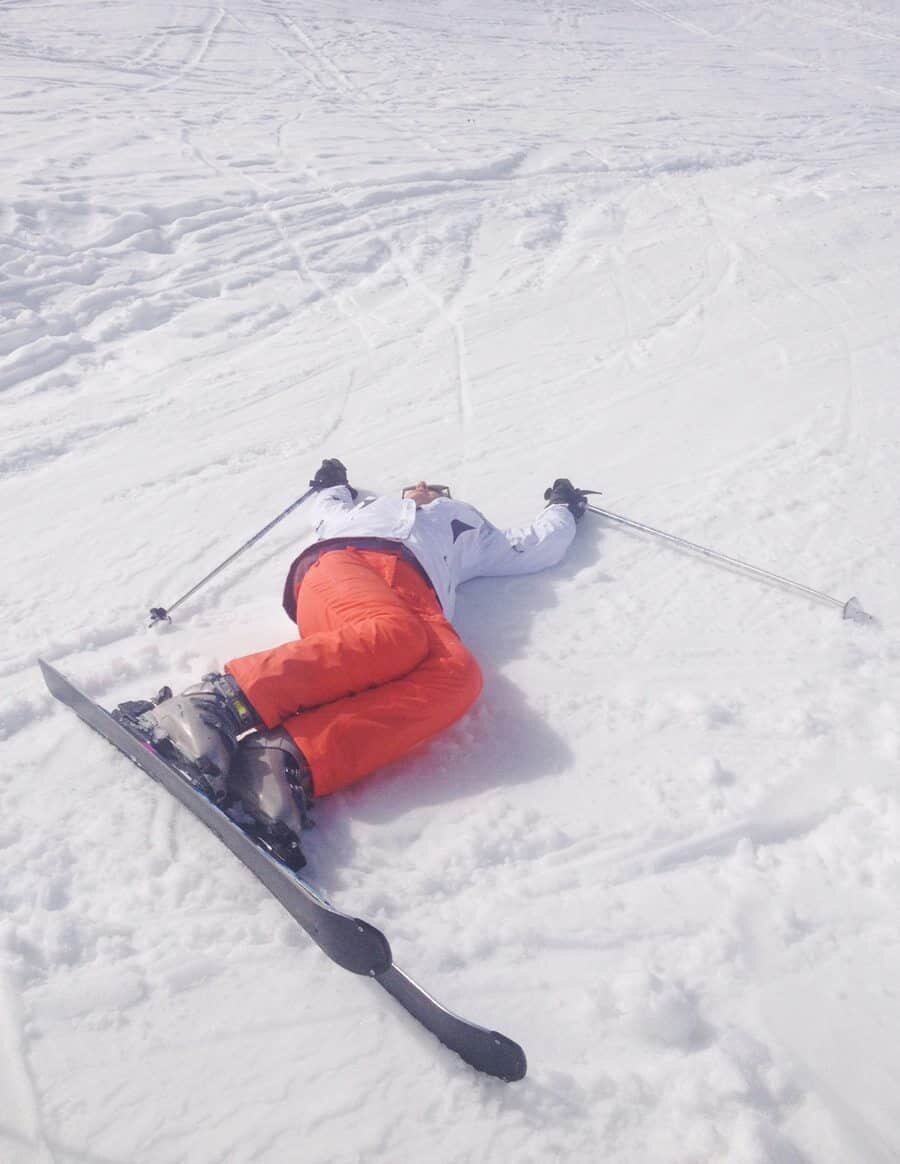 My day on the slopes went a little like this…

By the time I was ready to attempt the final slope down the hill it was about 4pm and the ski station closed at 5pm. This at least gave me a challenge and something to work towards, turning this 5minute slope into a 55minute one to ensure I’m back in time for closing.

I fell too many times to count, once really hard on my hip which resulted in a few tiny tears and a mini tantrum however then something magical happened, I found my legs and became a ski robot. I realised I could keep my legs just far enough apart to gain a little speed but not close enough that they will touch and I’ll fall, also from this position I could lean to the left and right to turn corners…it was brilliant. Until I got hit by a flying child. To the kids defence I was the whale in the kiddies pool, a pretty easy target who couldn’t move herself out of the way. I’ll take full credit for the collision and luckily the child bounced back and continued flying down the hill.

The accident came at about 4:45pm just as I was gaining momentum and had enough determination to ski robot my way to the finish line. Looking at how far we had to go and seeing the frustration all over my face, Clement suggested he take my skis and whisk them back to the rental store before closure while I waddled down on my boots…this was music to my ears.

As he skied off into the distance I felt at peace knowing I could walk myself to safety, I wouldn’t be stuck on the mountain and we wouldn’t be charged an overnight rental on the ski hire. While walking in ski boots downhill actually isn’t as simple as it sounds, I managed to reach the village by nightfall and turned around to see one lonely skier coming down behind me collecting the flags.

If you’re heading over to Europe this festive season and are going to give skiing a go for the first time don’t feel bad for starting in the baby slopes, your limbs will thank you for it and you will be able to sit nice and comfortably for days afterwards. Even better, get yourself a ski lesson with a professional! I’ll be taking lessons next time I brave it on the slopes…maybe winter 2015?

All photos were taken on my iPhone which I’m amazed wasn’t smashed into a billion pieces when it sat in my back pocket!

Make me feel better by leaving your clumsy ski story below in the comments…hopefully it wasn’t just me! And don’t worry, I laugh every single time I think about this day, writing this post had me in hysterics as I remembered my pain! 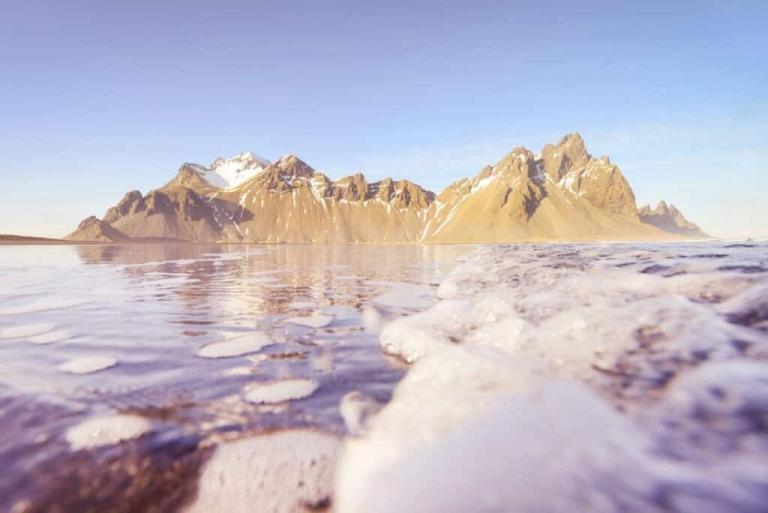 This post was so funny (um, not that I was laughing at you or anything…). I took my dad downhill skiing in Norway for his first time last year and it was so cute seeing him go all wonky legged. He’s been cross country skiing for years, but downhill is pretty different! Though I also kept him on the bunny slopes. I’m super impressed that you braved a a grownup one!

Love it Silvia! Don’t worry, I can laugh at myself pretty easily 🙂
Great to hear someone experienced on snow still has trouble with the downhill slopes!

What a beautiful spot to go skiing for the first time! I’ve never been, but my husband has been a swift snowboarder for years and I am hesitant to go along with him for fear of embarrassing myself.

I hope you took it easier that evening and enjoyed a much needed drink!

Don’t let my experience put you off trying it haha! I’m sure your hubby would be just as patient as mine and if you fail…there are always those hot chocolates to drink and snow angels to make!